EXCLUSIVE: Smash executive producers Craig Zadan and Neil Meron are developing another hourlong series for NBC in which music plays a key part. The duo is executive producing a dramedy written/executive produced by Grey’s Anatomy alumna Krista Vernoff. It will feature the music catalog of songwriter Diane Warren, who serves as a consulting producer. END_OF_DOCUMENT_TOKEN_TO_BE_REPLACED

EXCLUSIVE: Producers Craig Zadan and Neil Meron have set up the first project through the first-look deal they signed with Universal TV and NBCUni’s international TV production division in July. NBC has bought an hourlong drama from the duo and former General Hospital head writer Sri Rao. Tentatively titled White House Confidential, the project is described as an upstairs-downstairs-type soap set in the White House, told from the point of view of a young female doctor who has a secret from her past. END_OF_DOCUMENT_TOKEN_TO_BE_REPLACED

By THE DEADLINE TEAM

“Craig and Neil are forward thinkers who bring a unique perspective to the Oscar show,” Koch said. “Their enormous collective talent, coupled with their love of film, serves our show perfectly.” END_OF_DOCUMENT_TOKEN_TO_BE_REPLACED

EXCLUSIVE: Storyline Entertainment’s Craig Zadan and Neil Meron have signed a new two-year deal with Sony Pictures Television for TV movies and miniseries. The duo, who just closed a first-look deal with Universal TV and NBCUniversal International for series and specials, have set up several high-profile new longform projects: movies about Anna Nicole Smith and Warren Jeffs at Lifetime and a Bonnie & Clyde miniseries at History. END_OF_DOCUMENT_TOKEN_TO_BE_REPLACED

Network television will soon be live with the sound of music.

NBC announced Friday that it will partner with “Smash” producers Craig Zadan and Neil Meron for a live TV broadcast of Richard Rodgers and Oscar Hammerstein II’s “The Sound of Music.”

“There used to be a tradition of broadcasting musicals live back in the 1950s, and we’re thrilled to do it once again,” NBC Entertainment Chairman Robert Greenblatt said in a release. END_OF_DOCUMENT_TOKEN_TO_BE_REPLACED

Oscar winner Jennifer Hudson, of “Dreamgirls” movie fame, will play a Tony Award-winning Broadway star in a multi-episode arc in the second season of the NBC-TV musical series “Smash.” The casting was announced by Universal on June 22.

Shooting for the hourlong series’ next chapter begins this summer in and around New York City. It will return to the NBC schedule in mid-season, in the winter. Jeremy Jordan, a 2012 Tony nominee for Broadway’s Newsies, was previously announced the join the cast in season two. 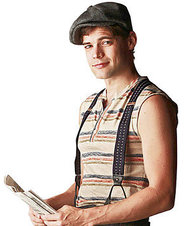 Mr. Jordan, a Tony Award nominee for his lead role in “Newsies the Musical,” will join the ever-evolving roster of performers on that NBC series in its second season, a person with direct knowledge of plans for “Smash” said on Thursday night. (The person spoke on condition of anonymity because the series has not END_OF_DOCUMENT_TOKEN_TO_BE_REPLACED

NBC has renewed midseason musical drama Smash for a second season. The move is not surprising given that fact that Smash was the highest-profile and most heavily promoted new NBC series this season. With NBC’s top entertainment show, The Voice, as a lead-in, Smash ranks as the network’s highest rated drama in adults 18-49 (2.6 rating) and total viewers (7.7 million). After a strong start the night after the Super Bowl, Smash dropped in the ratings but leveled off relatively quickly, staying above the 2 18-49 rating with the help of its big lead-in. Smash, which posted a 2.3 demo rating on Monday, chronicles the birth of a Broadway musical. Stemming from an idea of executive producer Steven Spielberg, the series stars Debra Messing, Christian Borle, Anjelica Huston, END_OF_DOCUMENT_TOKEN_TO_BE_REPLACED

Lifetime has assembled the cast of its Steel Magnolia reboot. Queen Latifah has signed on to star in and executive produce the original movie, an updated, contemporary TV adaptation of the play and 1989 film of the same name. She is joined on the all-Black cast by Alfre Woodard, Phylicia Rashad, Jill Scott, Adepero Oduye and Rashad’s daughter, Condola Rashad.

Produced by Sony Pictures Television, Steel Magnolias chronicles the lives and friendship of six women in Louisiana: ‘M’Lynn’ (Queen Latifah), Ouiser (Woodard), Clairee (Phylicia Rashad), Truvy (Scott), Annelle (Oduye) and Shelby (Condola Rashad). Supporting each other through their triumphs and tragedies, they congregate at Truvy’s beauty shop to ponder the mysteries of life and death, husbands and children – and hair and nails – all the important topics that bring women together. END_OF_DOCUMENT_TOKEN_TO_BE_REPLACED

“The Vow” helmer Michael Sucsy is in negotiations to direct Fox 2000’s untitled musical scripted by Susannah Grant (“Erin Brockovich”) that will be set to the music of The Beach Boys.

Craig Zadan and Neil Meron, the team behind successful bigscreen musicals “Hairspray” and “Chicago,” will produce with John Stamos.

The original musical, which is based on a fictional story and characters created by Grant, will be driven by the music of The Beach Boys. END_OF_DOCUMENT_TOKEN_TO_BE_REPLACED

Net dominates in demos on night after Super Bowl

NBC’s Broadway-themed drama “Smash” opened to good numbers Monday, airing behind the timeslot debut of “The Voice,” which followed up its monster post-Super Bowl premiere one night earlier with very impressive numbers. The shows combined for easily the net’s top non-sports scores this season.

EXCLUSIVE: Young Australian actors Brenton Thwaites and Indiana Evans are following in the footsteps of Christopher Atkins & Brooke Shields and Brian Krause & Milla Jovovich as the leads of The Blue Lagoon, Lifetime’s contemporary remake of the 1980 romance/adventure movie starring Shields and Atkins. (Jovovich and Krause toplined the 1991 sequel.) In the story, which echoes the biblical tale of Adam and Eve and is based on the novel by Henry De Vere Stacpoole, Thwaites and Evans will play Dane and Emma, a boy and a girl marooned on a tropical island where they grow up together, fall in love and discover sexuality. END_OF_DOCUMENT_TOKEN_TO_BE_REPLACED